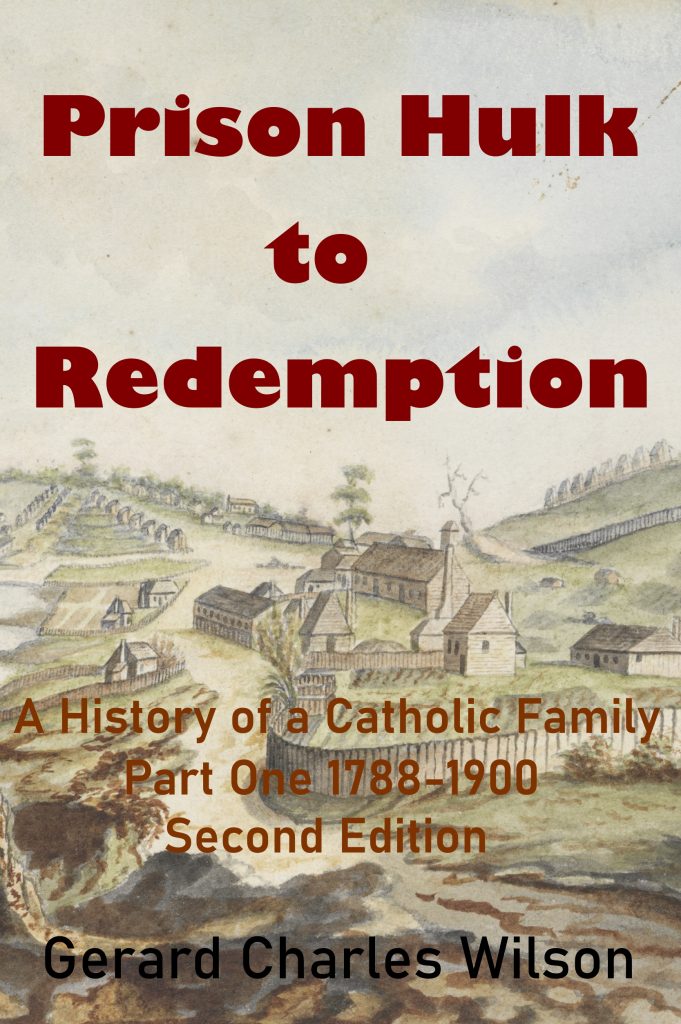 PRISON HULK TO REDEMPTION: A History of a Catholic Family Part One 1788-1900 Second Edition

A Journey through Colonial History with the Ancestors

In this first book of the series, A HISTORY OF A CATHOLIC  FAMILY, the author sets out on a journey through Australia’s colonial history with his ancestors, who gradually take on flesh and blood from the bone-dry official documents. All his ancestors are from British Isles, all arriving by the 1830s, two on the First Fleet in 1788. Most are from southern England: Wiltshire, Lancashire, Middlesex, Essex, Norfolk, Lincolnshire, and Huntingdonshire. Astonishingly, four are from two little villages close by each other in Wiltshire: Semley and Donhead St Mary.

A small Irish contingent of two convicts and one free settler come from Dublin, Monaghan, and Donegal. A farming family of four from Aberdeen Scotland, the Burgesses, literate people with a keen sense of decorum, make up the full count. It is surprising how much he finds out about them all—joys, successes, and tragedies. Their lives are anything but dull.

James Joseph Wilson, who narrowly escaped the gallows and was surprisingly literate for a man thrice convicted of burglary, arrived in Port Jackson on board the Prince Regent in 1827. The colonial authorities assigned him to Robert Lowe, one of the Colony’s early landholders. Lowe sent him to Mudgee in north-western New South Wales to shepherd his flocks. Young 18-year-old hutkeeper James Joseph was one of the first inhabitants in the Mudgee area.

He teamed up with fellow convict Michael Jones to look for land. They married sisters Jane and Elizabeth Harris, daughters of free settlers, and travelled further north-west to the Coonamble area, 330 miles from Sydney, to set up their farms. The two freed convicts and the Harris sisters became his great-great-grandparents.

There are nine convicts in the direct line of his ancestors. He traces their lives against the social and historical background of colonial Australia, presenting a very different picture from the view usually found in school history books. They all thrive, taking advantage of their second chance. This book is the story of their redemption.

Besides offering the reader an interesting, sometimes gripping family story, he reveals the cultural continuities in which his ancestors acted and how they responded to those continuities in a totally different physical environment. He seeks to discover to what extent the outlook, culture and character of his ancestors worked to make his extended family and him what they are. And, finally, perhaps most importantly, he sketches a picture of the way Australia developed as a new people and a new nation. In 1950, most Australians had an ancestry like his.

This first book is a history of colonial Australia, not of the famous and heroic, but of the small people, the anonymous people who were the heartbeat of a growing nation—people like his ancestors.

Since the publication of Prison Hulk to Redemption in 2016, the author has made many adjustments and additions, besides rewriting passages that could have been clearer.  In preparing this second edition, besides thoroughly revising the text, the author stresses the social and cultural continuities to bring out his ideas on what it means to be a people and a nation.

These ideas are drawn from his interpretation of Edmund Burke’s political philosophy which he conceives as a Natural Law conservatism. Burke had distinct ideas on how a healthy nation develops and, if it is not careful, how it decays, collapses, and falls prey to takeover. This present book is paired with his book, Tony Abbott and the Times of Revolution. Prison Hulk to Redemption is about the growth and development of Australia as a nation. Tony Abbott and the Times of Revolution is about the 1960s cultural revolution and signs of decay.

REVIEWS AND COMMENTS about the first edition

Available in paperback and ebook format on Amazon

FAMILY TREE
Readers of PRISON HULK TO REDEMPTION may find it helpful to have a family tree diagram to refer to. Below are the trees leading from me, my father and my mother:
Gerard Charles Wilson tree
Father – Charles Joseph Wilson
Mother – Marie Joyce Steele