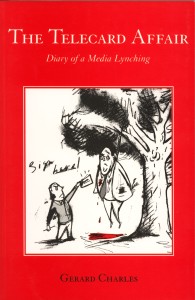 THE TELECARD AFFAIR: DIARY OF A MEDIA LYNCHING

IN OCTOBER 2000, The Canberra Times broke a story about the misuse of Peter Reith’s government-funded telecard. Unauthorised calls to the tune of $50,000 had been rung up on the Workplace Relations Minister’s telecard after he had given his son, Paul Reith, the card’s PIN in contravention of the Remuneration Tribunal’s guidelines. For more than two weeks, the story was headline news. Editorial writers, political commentators, and radio talkback hosts claimed that Peter Reith was responsible for his telecard’s misuse. This was a case, they said, of the rorting politician-of ‘snouts in the trough’.

The author took a different view. In the opening chapter of The Telecard Affair: Diary of a Media Lynching, he writes:

While the media and the Labor Party have Peter Reith battered and strung up as a public warning, I am going to argue that the Telecard Affair is not about former Workplace Relations Minister, Peter Reith. It is not about Parliamentary entitlements. It is not about MPs’ rorts. It is not about the usual ‘snouts in the trough’. It is essentially about the media as the sharpest corrupting influence in our social and political life. It is about those media groups who function as amoral commercial enterprises. It is about those journalists who betray their calling and are seduced, or coerced, by people who rule themselves according to their materialist objectives. It’s about the slow death of the processes of public justice.

The analysis of the media’s reporting of the Telecard Affair is unrelenting, and targets some well-known media figures.

The Telecard Affair was the author’s second book, published under the penname Gerard Charles.