My favourite series of stories during my primary school days was Enid Blyton’s Famous Five series – which I spoke about below. I have since collected all the hardback editions – see also below – most in very good order, some with the original dust jacket. The other two series I loved were the Tiger Annual and the Lion Annual. My older brother Michael received the Lion Annual for Christmas while I received the Tiger Annual. We received most editions between 1954 and 1961. By then Michael had outgrown them. I was not at all embarrassed to receive the 1962 Tiger Annual at thirteen-years-old. As with the Famous Five, I have been looking to collect the annuals between 1954 and 1962. Unfortunately, the editions we received had gone to the book heaven when I decided to collect them. I have been able to collect most. One I was missing was the 1960 Lion Annual. When I saw a rather tatty edition on UK eBay I ordered it to be given to me as a Christmas present. The book arrived and turned out to be in better condition than I thought. Only the cover was a bit worn at the edges. The interior was almost mint. Here’s me reading it on Christmas Day, as I had done fifty-six years ago. 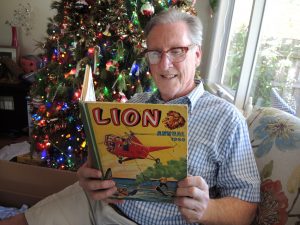 Stock of the 2017 revised edition of IN THIS VALE OF TEARS is due to arrive from the US at the end of January. I have received a proof copy and am very pleased with the new cover. The cover reflects the haunting sinister atmosphere of some of the vital parts of the story.

From Kathryn Farrell, second cousin once removed,  great-granddaughter of my grandfather’s brother.

Thank you for a most interesting and well written account of James Joseph Wilson’s life.

I have been doing some “family tree” work for just over a year now, and thought I was clever accruing some names and dates,  but you and your family have fleshed out the man and his times, and fascinating it was too.

My name is Kathryn Farrell née Houghton. My paternal grandmother was  Jessie Geraldine Wilson, she married John Houghton and her parents were Michael Henry Wilson and Clara Jane Cluff.

Once again thank you for uncovering such a rich family history that I was totally unaware of.

A favourable review of Prison Hulk to Redemption: Part One of a Family History 1788-1900 has appeared in the November-December edition of Annals Australasia.

On his ancestral string, its strands mostly British, Gerard Charles Wilson has hung what is effectively a history of Australia from the earliest European sightings to subsequent landfalls, encounters with the original inhabitants, settlements and the achievement of a hard won prosperity.

Wilson’s meticulous research has encompassed official documents, newspaper file and a wide range of books. His constant focus is the way his ancestors from a variety of religious backgrounds came to focus – or refocus – on the Catholic faith despite prejudice. Read on