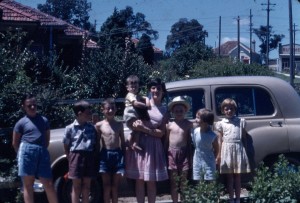 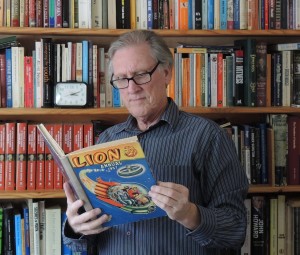 Foremost among the books I loved as a kid were the Lion and Tiger Annuals. They were published in England but I hardly noticed the difference. Even the comic strips set in an English boarding school did not seem out of place. Boarding schools in Australia were not that much different, which is only to be expected. As I am at pains to convey in the books of my family history series, most of our institutions, manners and customs originate in Great Britain but have been modified to suit Australia’s unique conditions.

My brother received the Lion Annual and I the Tiger Annual for Christmas. We swapped, of course. They were among my favourite Christmas presents. I have such pleasant memories of taking them to a quiet corner to read on Christmas Day that some years ago I set out to collect those we received – 1956 to 1961. I had managed to collect all except the Lion Annual of 1957 – until our trip to England in 2014. One of the main purposes of the visit was for me to visit Jane Austen territory – Bath and Lyme Regis.

After spending three very enjoyable days in Bath, we (my wife and I) drove down to Lyme Regis. After walking the length of Marine Parade and venturing to the point of the Cobb, we returned to where our car was parked near the small shopping centre on Broad Street. With the intention of having a further look around we walked up Broad Street where Sanctuary Bookshop, a secondhand bookshop, caught my eye. I could never pass a bookshop like this one.

After rummaging around the shelves and piles of books I was overjoyed to find a pretty battered copy of the Lion Annual 1957. (See the photo above.) But it was a copy. I had a further look around to see if there were others. I am always looking for copies that are in better condition than the ones I have. Not finding anything, I approached one of the two gentlemen owners of the bookshop. I showed him the volume and asked him if he had any others that I perhaps had not seen. He looked at me, blinked and said in a rather plummy accent, ‘Would you please start all over again?’

Bemused, I repeated my question – slowly. This time he understood, replied in the negative and was generous enough to halve the marked price. My (Dutch) wife laughed heartily but though diverted I remained somewhat bemused until we drove out of the town. I clearly have an Australian accent but it is far from broad.